What does “DTM” stand for? DOWN THE MIDDLE! Just the logo above illustrates. It’s the only upright cooling system available for the VW/ Porsche Type 4 and VW Type 1 aircooled engines that effectively and efficiently routes cooling air to the cylinders that need it most!! This is something that no other cooling system available presently incorporates!

A cooler running engine will produce more horsepower, something Jake Raby's Aircooled Technology's has proven time and time again on their dyno. Cooler cylinders and heads keep the engines efficiency higher and increase engine life and even increase fuel economy! Fuel economy is a benefit of higher efficiency! So is HORSEPOWER!

The DTM cooling system is not “New” it has a rich history, and was an original design from a true Innovator. In the paragraphs below we will share a story on the history of the DTM. This page is dedicated to the remembrance of the originator of the DTM, The late Joe Locicero. This man will never be forgotten in the minds of Type IV enthusiast around the world.

It is a common dream for the average VW enthusiast to have a never ending desire for Higher reliability, better power, better longevity, higher speeds on the freeway and better fuel economy.

Circa 1988, 40 year VW veteran Joe Locicero started his quest to make this more than a dream, he had an idea to make it a reality. For years the European VW enthusiast had been retrofitting the later model VW Type IV engine to all types of VWs. The engine was bigger from the factory with many revisions that made it much stronger than a Type I that needed many modifications to make better power. The TIV had an attitude that better suited the higher speeds that European enthusiast could enjoy on the Motorways and Autobahns.

With the TIV conversion there were a few hurdles that needed to be negotiated, the biggest being the best way to cool the engine and keep it capable of being installed into a TI vehicle without cutting the engine bay. The perfect system would be simple, just like the VW, it would be attractive and it would keep the original appearance of an upright VW aircooled engine. 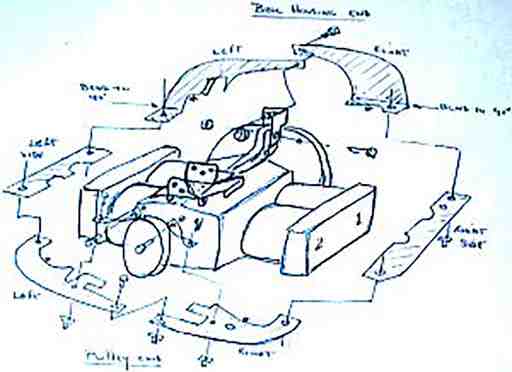 This is when Joe decided to create his own cooling system based on common sense, and old fashioned engineering. His cooling system was named the “DTM” or “Down The Middle” cooling system, and was designed to allow the installation of the “Type IV” engine into a beetle and all other TI vehicles WITH NO CUTTING OF THE ENGINE BAY. It was titled “DTM” due to its construction of evenly and effectively distributing cooling air to all 4 cylinders. Joe even made a Type I style DTM, made to fit the Type I VW engine that you will read about later in this article.

Joe was retired and needed a way to supplement his income, so he started manufacturing the cooling systems. Joe used manual machines and handcrafted the entire cooling kit himself. It was common to receive a shroud kit and find written in the bottom of the oil cooler housing “Hand Crafted For_________” in a permanent marker. 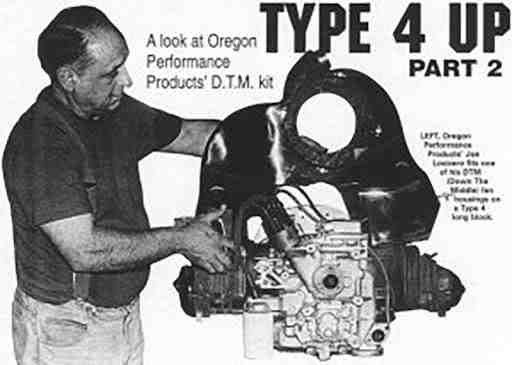 I first became acquainted with Joe in the mid 1990s, soon after his shroud had debuted in Hot VWs magazine. Almost from the very beginning I could tell that Joe was an incredible innovator that liked doing things the old fashioned way, and I liked that. He constantly amazed me with his knowledge of the aircoooled engine, it seemed like he knew an answer for everything. The first time I called him, our conversation was almost 3 hours in duration, and it blew me away that he would spend that amount of time with someone that he had never talked to before.

I purchased my first DTM from him and installed it, and was amazed! The kit installed so easily and Joe hand labeled many of the parts for orientation onto the engine correctly. Joe’s attention to detail was fascinating. In the months following the first shroud purchase Joe and I became buddies, and when I got myself into a mechanical quandary I would call on him first for help. Little did I know then that Joe would be the man who would inspire me to create a business devoted to the aircooled engine, that would lead to the innovation of the “MassIVe Type IV”. I already owned my shop and was doing well, but still primarily worked on VWs, TI engines and 914s, but Joe convinced me that the TIV revolution was just around the corner, so I listened!

In late June 2002 the production of the “DTM” shroud suffered a serious shock when Joe was diagnosed with lung cancer. July 1, 2002 after a 51 year Love affair with the VW and its engine, Joe passed away, leaving the TIV engine conversion suffering a huge loss. I lost a good friend, a man that had become my idol, and an inspiration.

My company had purchased more DTM shrouds than anyone else since the shroud had been in production, because we had proven the design to fit, work, and COOL better than any other kit readily available. I built engines that others said could not be cooled without a 911 system, and outfitted them with a DTM, and they cooled well! Later I would go on to find that the DTM cooled better than most of the 911 systems!

With my persistence as well as a few other enthusiasts having a desire for the kit Joe’s son Vince agreed to make the shroud a reality again. After a short time, Vince lost his drive to continue the shroud production and the DTM died. At this time I made an effort to purchase the company, and make the shrouds myself. Vince refused my offer. At this time I was forced to make a big decision as to what should be done to continue the Type IV conversion revolution. I had never been into manufacturing, or parts sales and to this point had only offered complete “Turnkey” engines. That was my specialty and where my reputation was centered.

I started seeing what it would take to basically manufacture a copy of the DTM shroud and create my own kit. I did not feel bad about copying the design as Joe was going to sale his business to me before he passed away, but never got the chance. There was no one to continue making the best cooling system available, so I decided to do it myself, and in mid January 2003 I released my intent to the public and started the quest.

I had never previously worked with fiberglass components, so that was to be my first challenge. A few years before I was attending a car show and met David Wiley. David worked for a company that was the leader in fiberglass hoods, fenders and etc for the aircooled VW. Little did I know then that he would be THE “Master Fiberglass Technician” that would make a mold from the very first DTM shroud that Joe ever produced. Joe had given me this shroud only days before his death, as a gift. It was the original DTM! It was Awesome! And I still have it!

Having used so many DTMs, (literally hundreds of them) Brent and I had found some small issues with it and David was more than willing to address the issues with our new version of the shroud. David addressed some structure concerns also and made a recommendation that the shrouds be made with a higher temp resin and with fiberglass cloth, instead of the “Chopper gun” method that is normally used in watercraft.

Then something happened. The same week that David finished our first new shroud the molds and fixtures from Joe’s original business went up for sale on Ebay. Included with this package was the DTM TIV shroud, Joe’s prototype for his 911 style shroud (that he never got to finish) as well as a mold for a Type I DTM. The auction ended without the reserve being met. David and I spoke about the molds and he told me that he could rebuild the mold that Joe originally had easily and that with the molds we could produce more shrouds. I also wanted Joe’s old fixtures for machining the castings and I wanted the rights to the name DTM. So, since the family was not open to an offer from me, I had a good friend of mine purchase the molds and rights to the name, but not the business of Oregon Performance. The goods were packed up by Joe’s family and sent to my good friend. Once everything was inventoried the goods were then shipped to me, proper paperwork taken care of and the DTM legacy was reborn. The DTM molds were sold to us on July 1, 2003 one year to the day that Joe had passed away, it was very ironic.

I plan to always give Joe all the respect he deserves for creating the DTM cooling system, and to never try and claim the system as my own invention.

Thank you for reading about the history of the DTM. I hope this gives you a better understanding of what the system is, and how it came about. 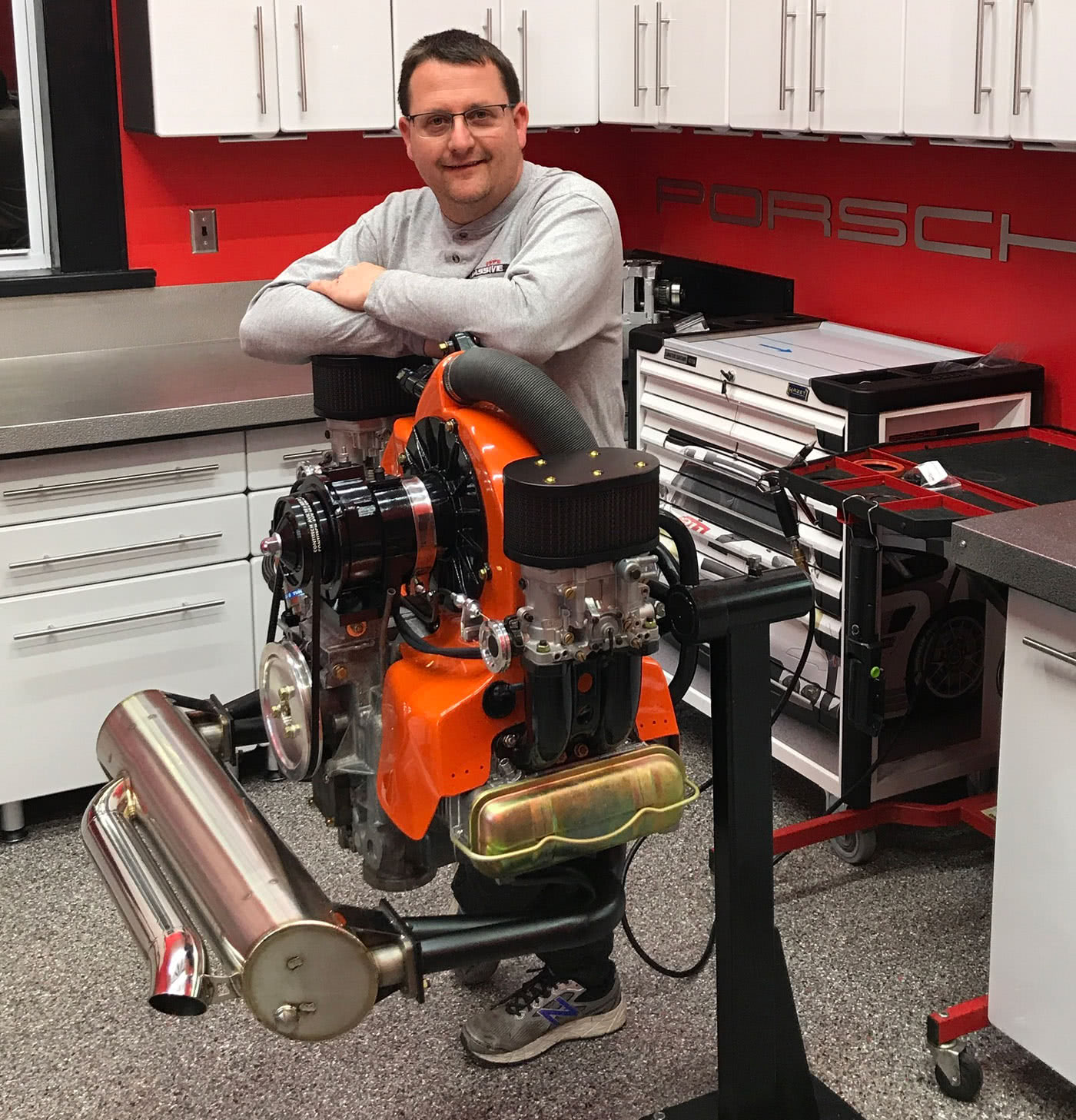 Aircooled Technology specializes in bringing back to life all 4 cylinder Porsches and Volkswagens from Type 1 VW conversions to 4 Cam Carreras to 356 and 912 engines and even the 911 six cylinder through the 993 series.

Don’t worry… If you vehicle currently has a VW Type I upright engine, our shroud and a TIV engine will fit! NO cutting of the vehicle and no machining of the engine case!

The “bulletproof engine” that was developed to push a Porsche 914 at 100MPH+ or a 5,000 pound Bus at 75MPH all day long and do that for 100,000 miles can now be installed in your car easier than ever! Have 100 STOCK Horsepower and room to expand RELIABLY!

The following are technical specifications and dimensions for The MassIVe DTM shroud kit:

Offset Shroud: Shroud is set back on left side to permit air to blow directly between #3 & #4 cylinders. This is the main difference between the MassIVe DTM shroud and any other cooling system currently available. Not even the Porsche 911 systems have a means of directional airflow incorporated into their structure,

Air Distribution: Shroud is internally partitioned to distribute 40% to each cylinder bank and 17% to the oil cooler housing. This is more airflow than the stock TIV cooling system was able to deliver to the oil cooler.

Interior Control: Right bank; direct to cylinders. Left bank; internal shroud form, two air guides and air deflector reverses air flow to # 3 & #4 cylinders. The design of the shroud keeps all airflow on the left side of the engine evenly distributed with minimal stagnation.