When rebuilding a Porsche Boxster, Cayman, or 911 model with the M96 or M97 engine, there are many considerations when evaluating your options. With thousands of engines fitted with Nickies over the span of a decade, no one has more experience than LN Engineering when it comes to solving cylinder issues associated with Lokasil engine blocks.

It is a guarantee if the engine has not been reconditioned either by sleeving or direct plating, the bores are out of spec on even a "fresh" rebuild. If the bores do happen to be in spec, there is also the issue of other known modes of failure associated with Lokasil and Alusil engine blocks including, but not limited to d-chunk, cracking, and scoring failures. Nickies cylinders with NSC (nickel silicon carbide) plating, similar to Nikasil, address all known cylinder weaknesses that direct plating of blocks cannot address. 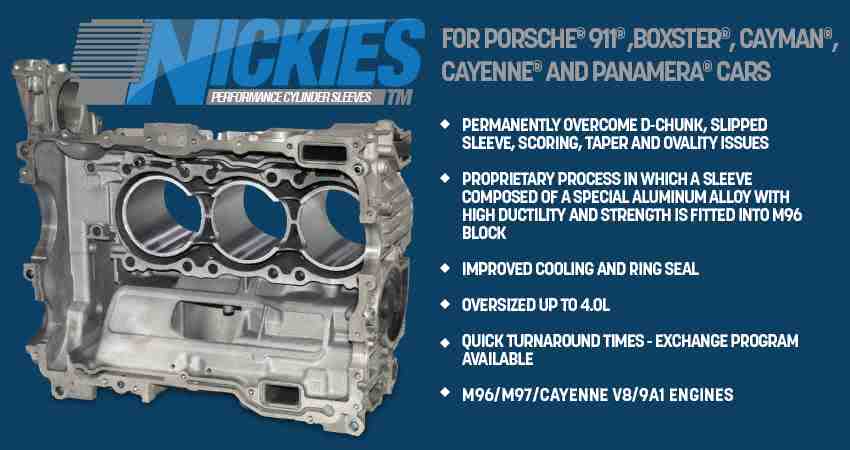 BESIDES NICKIES™, LN ENGINEERING OFFERS AN EXTENSIVE LINE OF PARTS AND UPGRADES TO ADDRESS MOST OF THE KNOWN ENGINE ISSUES DURING REBUILD. DOWNLOAD OUR M96/M97 REBUILD GUIDE AND NICKIES + IMS PROGRAM BROCHURES TO LEARN MORE: